Why We Need to Talk About Women in Tech 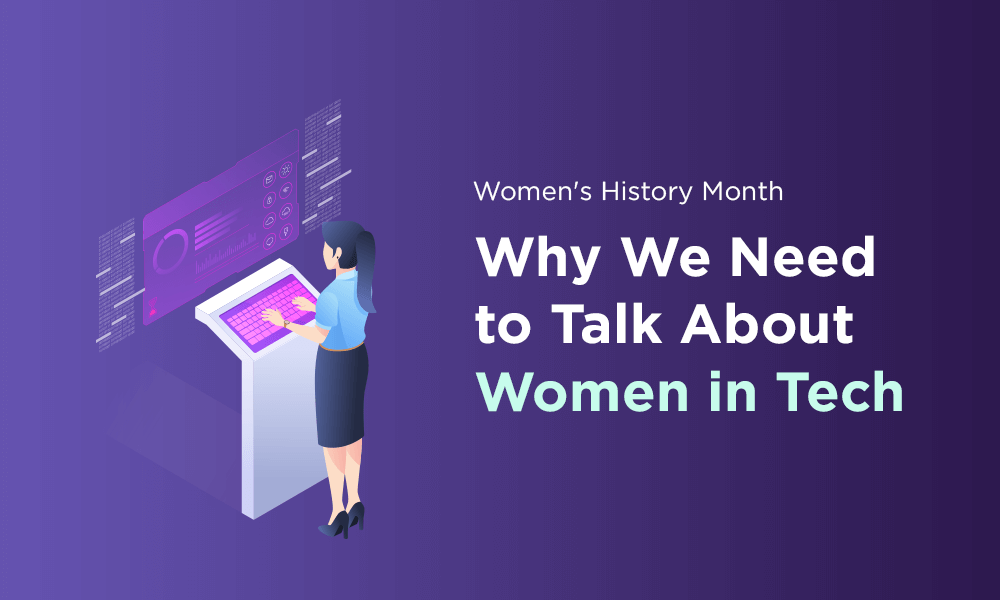 This month is all about ‘Women in History’ so we have created a series of articles to celebrate and elevate the difference all women who came before, all those here today and future women we have yet to meet have made, are making and will make to society. In honor of ‘International Women’s Day’ at the start of this week, we are discussing the biggest, best and boldest idea the tech industry has yet to embrace fully and wholeheartedly: Women in tech.

Why do we need to talk about women in tech? The simple answer is there are not enough. We believe that this is a topic that although sometimes seen as divisive, is critically important to the success of all industries not just ours. When we give women room to make an impact, everybody benefits. Inroads have already been made but there is still so much more that we can do to improve. Creating momentum by talking about it is one way of doing it but we must go one step further and do more about it.

Historically, the tech industry has been entirely male-dominated catering to a majority male market even though what is out there is for everybody to use. With more women in tech, there would be a diverse array of tech and in some cases tech tailored just for the female audiences. Stats on women in technology from ISE Mag found women made up 46.9% of the workforce but only 25% were employed in computer science roles. Just less than half of which makes up women of color with 3% African American, 6% Asian and 2% Hispanic. A comparison to the 1980s saw female employment in these roles peak at 36%.

How have things changed in the meantime? Classroom dynamics, Interests, career paths, lack of female mentors and role-models are all factors in how today’s girls view a life in STEM. How females end up in technical roles is determined by how they are taught and treated in the classroom. Could the way the female brain is mean we are wired differently to our male counterparts? Perhaps. Traditionally, results are the same as boys in STEM subjects but females generally score higher in essay-based subjects. This may be the academic response to how much females are encouraged by a teacher and even what we are taught by our parents trickles down into what is perceived as good and bad for boys and girls.

Teachers should not underestimate their influence on the children they teach. Their encouragement could mean all the difference between girls finding STEM interesting and moving towards a career in the field. This does not mean that girls do not study STEM subjects throughout their school career with 64% of females choosing STEM subjects compared to 83% of males and 7% of females choosing physics compared to 17% of males. It is quite likely that girls find the material difficult to learn. Teachers struggle to make the subject appealing because this facilitates the learning process and enables female students to try and visualize having a tech career. Would female students consider a tech career in the future? Less than a third would in comparison to the 62% of males when asked the same question.

More than half (53%) of females are more likely than 43% of their male classmates to make executive decisions based on what they want to do in their career for those who have already thought that far ahead. When students are of the age where they are deciding next steps and meeting inspiring industry figures for females the tech industry career is not generally an option put forward. 16% of females said that a career in tech was suggested to them which is just over half that amount (33%) for males. Why is this? Some have argued this exacerbates the ‘tech industry is a man’s world’ stereotype. This tends to go hand in hand with the lack of information about the tech industry and what certain jobs entail so that females are better positioned to decide what is best for them. 30% of females choose to study STEM-related university courses compared to 52% of males. 2% of females go on to engineering jobs compared to 13% of males.

Is there something to be said for that same female empowerment associated with celebrating ‘International Women’s Day’ as there is for seeing STEM women? All the data points that way with not enough female role-models in the industry. A lot of the technology created and used goes on behind closed doors and under a veil of secrecy for security purposes. STEM businesses walk a fine line between protecting themselves and interesting the next generation of women to take over. For impressionable girls, this means they never get to see
changes made until it is too late and the opportunity has passed. Today’s girls absorb everything through media, tv streaming services and social media as such they like to see those that share commonalities either in personality or background. They want to get to know the person as much as they want to know about what they do for a living.

Are the girls of today able to name someone within the industry? They can. There was not any gender disparity when 34% of respondents could name an individual within the industry. 66% of males and females could name a notable man and 22% of males and females could name an equally notable woman in the tech industry. As part of a growing industry, we have a duty and responsibility to encourage and raise female voices. The more female voices are heard the more names will be known and the more girls will feel seen because of the female industry leaders they gravitate towards. On the other hand, 83% of female respondents could not name someone who inspired them to pursue a tech career compared to 59% of males. When female figureheads are obscured from public view, even when it is not deliberate, gives the impression that their achievements and contributions do not matter and are not worth celebrating. Here at VUSE we believe everyone deserves to be celebrated no matter how small a difference they make in the workplace.

On the Career Ladder

Businesses need to commit to creating more opportunities specifically aimed at helping women make an impact on the global market especially in software engineering and computer science. In two decades, there has been a 2% increase in female software engineers from 12% to 14%. Once you have employed women you need to think about the best way to retain them. Experts will inform you there are multiple factors to take into consideration: having a diverse workforce, promote the underrepresented regularly, pay men and women the same salaries for the same job, to offering parental leave to new mothers and returnships to support them when they are ready to return to work. Most importantly of all, pivot conversations away from how women look in job roles towards the contributions they can make to a business.

19% of females in entry-level and mid-level positions are made up of predominantly white women with much smaller percentages of Asian, Black and Hispanic women. 18% of females of color make up entry level positions while 30% are white women and 35% are white men. Asian, Black and Hispanics report their desire for promotion more than both white males and females. Hacker Rank reports that there are 20.4% of females over the age of 35 remain in junior-level roles compared to the 5.9% of males in the same position. Even when age is taken out of the equation there are still more women than men in junior-level roles. More needs to be done when it comes to equality to increase the amount the higher up the career chain employees go with 16% in senior level positions and 10% in C-suite positions. In the most highly skilled jobs, female salaries outpace male ones.

Workplace diversity will often clinch it for the female portion of the workforce. Women in Tech statistics report that 50% of women face gender discrimination by white males. Of those surveyed 43% of Americans believe that women create safer and more respectful workplaces than men and only 5% of Americans believe men create a safer workplace than women do.

When businesses fail to meet the needs of those who work within the tech industry women take their business elsewhere even so far as to create their own businesses. 40% of all US businesses are owned by women and 64% of all female-owned businesses have been created by women of color. Having the resources to set up these businesses require a lot more nous from women who choose to do it this way with female-led businesses receiving 7% of financial help. The last 5 years has seen a 24% increase in female representation at executive level. With better gender diversity, companies and society as a whole benefit from higher quality products, services, businesses and industries because of innovative ideas, diverse backgrounds and experiences. The establishment of female-only tech groups and support networks have been popping up all over America, the most notably F-Bomb Breakfast Group, whose purpose is to allow women in tech to meet, network, discuss challenges, celebrate triumphs, offer advice and support to each other.

49.6% of the world population is female of which 49% are a part of the global labor market. It is an undisputed fact that though things are improving there is still more to do when it comes to getting more women in tech. Businesses need to believe that investing in women is the right thing for their future because when you see potential in them anything is possible.

Calling all female software developers! We need YOU.

Come and join us!