Python v Java: Which Programming Language Should You Learn? 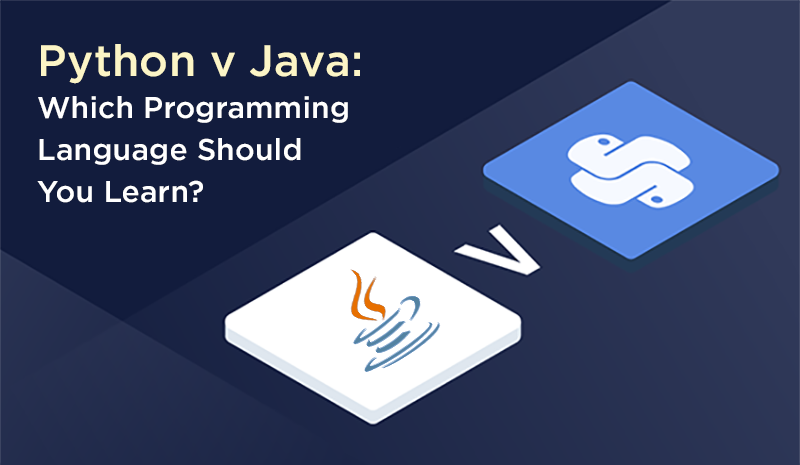 Deciding between the current crop of programming languages may be an exciting, if somewhat unenviable, task for programmer and developer hopefuls; particularly given that several hundred languages are currently available, with the list ever-growing.

For the last few years, the popularity of programming languages has undergone something of a dramatic shift – the extent of such a shift varying according to different analysts’ perspectives. Nonetheless, surveys undertaken by Stack Overflow and GitHub (PYPL Index) reveal the remarkable rise of Python in contrast to Java, as reflected within Google Trends’ insights.

Given the clear prominence of Python and Java within popularity rankings, this article will look to provide a comprehensive comparison of these programming languages.

Despite claims that Java is a dying programming language – largely inspired by the rise of newer languages – Java is still an extremely popular, well-established language used by millions of organizations. The object-oriented language is most commonly used for the development of web, mobile, and enterprise applications due to its reputation as a stable option for businesses, with a broad array of available features.

James Gosling, Java’s founder, once described the programming language as, “C++ without the guns, clubs and knives.” In other words, Java was designed for ease of use – for the average programmer – without a cumbersome mix of bells and whistles. Indeed, while it may not be quite as flexible as C or C++, Java’s comparative lack of complexity, its popularity with large enterprises and complex systems, not to mention its platform independence (thanks to Java Virtual Machine), among a host of other notable characteristics, separates it from the herd as a prestigious programming language.

Of course, the extent to which this affects the efficiency of the language may be debatable given that static typing reduces the time taken to execute code – as it catches type mistakes at compile time – making it a faster option than Python, technically.

• Suited to software engineer roles, with a high demand for Java developers.

• Running on JVM allows Java to be scaled to most platforms and devices.

• Requires a comparatively greater amount of code to be written to perform a particular task.

• Can still be a somewhat difficult language to learn for those new to programming.

• Increased memory consumption with JVM, which can lead to increased costs.

Python has been experiencing significant growth for several years, most recently due to its adoption as the primary programming language for data science and machine learning, catapulting it into 2nd place in RedMonk’s June 2020 rankings, behind JavaScript. This is particularly significant given that Python’s rise marks the first occasion, since 2012, that Java slipped out of the top two places in RedMonk’s rankings.

Beyond its specialized libraries (most notably within the field of AI) and array of modules, one of the most remarkable qualities of Python is its comparative ease of use, with clutter-free, versatile syntax.  Indeed, as Guido Van Rossum, Python’s founder, has remarked, “the joy of coding Python should be in seeing short, concise, readable classes that express a lot of action in a small amount of clear code.”

However, where the language suffers is in its lack of comparative reputability in terms of the building of desktop and mobile applications, not to mention enterprise application development. Furthermore, while Python’s ease of use is certainly an advantage for those unfamiliar with programming languages, getting used to a language that doesn’t utilize curly braces, classes, or public/private modifiers may make transitions to other languages, like Java, especially difficult.

• Python and its frameworks (for example, Django) are well-suited to back-end building and the fields of data science and machine learning.

• Very simple to learn and use.

• Host to a broad collection of open-source (and specialized) libraries.

• Easy integration with other programming languages, with libraries like Cython and Jython, that allow for cross-platform development.

• As an interpreted language, Python's use of an interpreter – rather than a compiler that Java utilizes – results in a comparatively slower code execution time.

• Getting accustomed to the ease of use of Python’s features can lead to future difficulty in working with other programming languages.

• Unsuited to handling complex data due to the primitive nature of the language’s database access layer.

Java and Python are among several prestigious programming languages that we provide industry-leading expertise in. To find out how you can leverage transformative technologies to meet your organization’s ambitions, get in contact with VUSE today!