Are Progressive Web Apps (PWAs) the Way of the Future for eCommerce and Marketplaces? 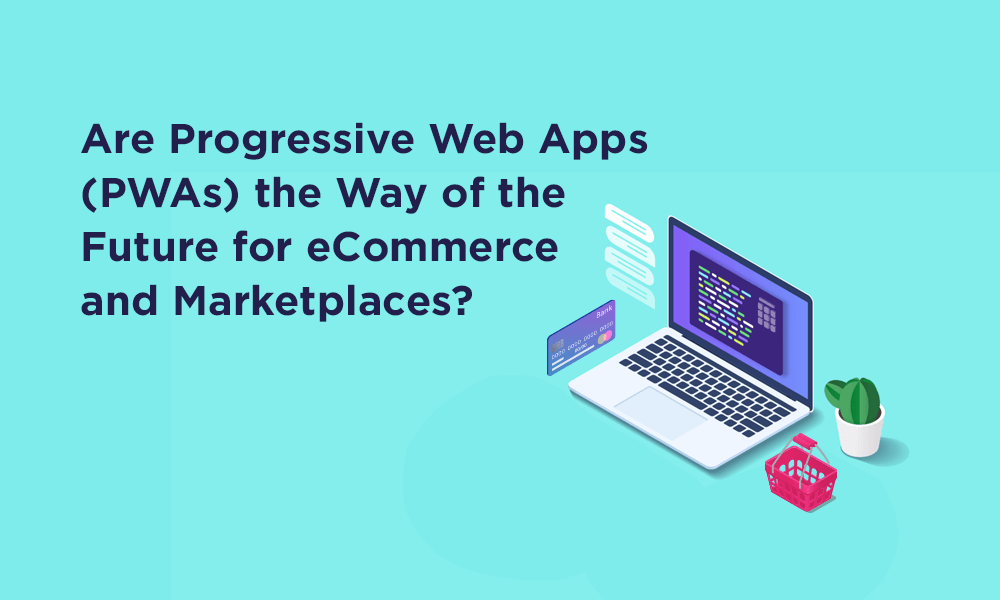 Mobile-first approach, dependable performance, cost-effectiveness, excellent user interface and excellent cross-platform accessibility. Isn't it everyone's desire to have a modern tech solution? That's what PWAs are all about, so it's no surprise it's one of the latest trends in software development.

A Progressive Web App is a website or web app that looks and acts like a smartphone app by combining the advantages of both approaches. They reuse the website's code to provide a mobile experience. The concept is simple: the browser recognizes users who are interested in your content and encourages them to save the website as an app to their smartphone's home screen. Initially, PWAs were only available on the Internet, rather than in app stores. However, this has eventually changed as businesses that already have a native app they want to stop developing can now monetize their PWAs and access a native API. As evidence that PWA is more than a fad, Internet leaders around the world have already adopted it and continue to invest in it. Twitter, Forbes, AliExpress, Pinterest, Uber, Flipkart and Alibaba are just a few examples.

PWA and eCommerce are a Perfect Match

PWAs will continue to flourish, and it appears that the eCommerce industry is the biggest winner. The reason is that people who shop online tend to do so on their mobile devices rather than on their computers, so eCommerce requires a mobile-first approach, which PWA offers.

Additionally, PWA is excellent for visually displaying data and ensuring a consistent user experience across all platforms. This leads to more engagement and interaction, which is the core of successful eCommerce. Mobile shops provide a lower entry-level that persuades consumers who do not want to download native applications through the store. They can quickly and efficiently become acquainted with the shop's offerings thanks to PWA, which requires no setup and can be accessed via the www address.

Push notifications are supported by PWA eCommerce mobile shops. It's an excellent way to alert customers to new items, exclusive deals, and exclusive discounts, as well as inform them that their package is ready for pickup or that they have an invoice to pay. When compared to native mobile applications, PWA marketplaces are considerably faster. The shop will be operating in no time because a portion of the interface and the app's foundation does not need to be downloaded each time. That works even with slower networks and limited bandwidth.

The goal of any eCommerce platform, regardless of size or sector, is to reduce consumer acquisition costs and blockers while simultaneously increasing content consumption and shareability, boosting conversion rates, and driving sales. Fortunately, all of them are assisted by PWA mobile shops.

It's an Asian eCommerce giant that operates one of the world's largest marketplaces, delivering anything at any time to 666,5 million monthly users. Initially, customer interaction was a problem, and app download rates were poor. However, they saw a 104% rise in users, a 74% increase in time spent, and an 84% increase in iOS conversion rate after launching PWA.

This world's most popular hotel search engine compares over 700.000 hotels across 175 different booking sites. Unsurprisingly, Trivago has more viewers on mobile than desktop. Their PWA has home screen shortcuts, push alerts, and offline access, much like a native app. It turned out to have a 150% rise in user interaction.

5miles, a monthly marketplace with over 2 million users, was found to be accessed primarily through mobile web, even though it was not designed for it. In contrast to the fantastic, but not particularly popular mobile app, the user interface was simply not what customers anticipated. So why not make a PWA that combines the best of both worlds? That's a 50% drop in bounce rate and a 30% rise in shop time!

One of Africa's most famous eCommerce sites had to deal with the fact that the majority of its users had poor and unstable internet connections. It's no surprise that it prevented them from installing large applications. As you would expect, after PWA was introduced, the numbers skyrocketed. The transfer rate was 33% higher, the bounce rate was 50% lower, there were 12 times more users, and the data usage was 5 times lower. Another major success.

With over 248 million monthly users, India's largest eCommerce site initially went all-in on native phones. This shut their mobile website! However, thanks to user re-engagement, offline usability, and the pace of PWAs, they had to reconsider their strategy. The results of the PWA were astounding: three times more time spent on the web, a 40% re-engagement rate, and a threefold reduction in data use.

PWA in eCommerce equals advantages for the company

While the above findings are wonderful, we all know that life is not the same for everybody. So, what is driving eCommerce company owners to invest in creating a Progressive Web App (PWA) mobile store rather than building native iOS and Android apps?

First and foremost, cost-effectiveness is pivotal. Rather than working on three distinct applications on three separate platforms with three different development teams, you concentrate on only one. It's simply easier to manage the growth of your eCommerce marketplace when it's built on a single technology and produced by a single team. Three times the amount of time (as well as the expense and nerves) required to expand the store. There are no parallels to be drawn.

Next, you can take advantage of a variety of options for promoting your PWA mobile store. Since www is the foundation of its ecosystem, you will profit from a carefully considered SEO strategy, as well as investments in AdWords, Google Ads, and other PPC promotions, just as you would with your website. Progressive Web Apps are also well-indexed in Google, making them easier to locate and move traffic to. That is possibly the most significant advantage of PWA in eCommerce: limitless and efficient marketing opportunity. Businesses could always use such a boost, particularly if they operate in a competitive market. A native app would never be able to have that level of functionality.

Moreover, PWA refers to a completely automated update procedure. There's no need to have the customers return to the store and waste time and data on small bug fixes. A mobile shop that uses PWA will easily adjust to new developments and incorporate new solutions – and the customers won't even know! All of this enables PWA eCommerce shops to attract a considerably larger number of smartphone users, which is critical as mobile use continues to outnumber desktop use.

Figures aren't deceiving. The Progressive Web App is an excellent way to improve nearly every aspect of your mobile store. Especially now, when users are seeing mobiles in a new light. The reality is that the number of downloads of native apps decreases, despite the overall time spent on mobile always increases. Customers want comfort, and they want the mobile purchasing process to be as easy and enjoyable as possible. In a highly competitive world, company owners can invest in marketing to increase revenue and customer satisfaction. PWA accomplishes both, and with Google on board, the future of this strategy is secured.

Get a Free Quote today from VUSE and let us help you in your tech endeavours!