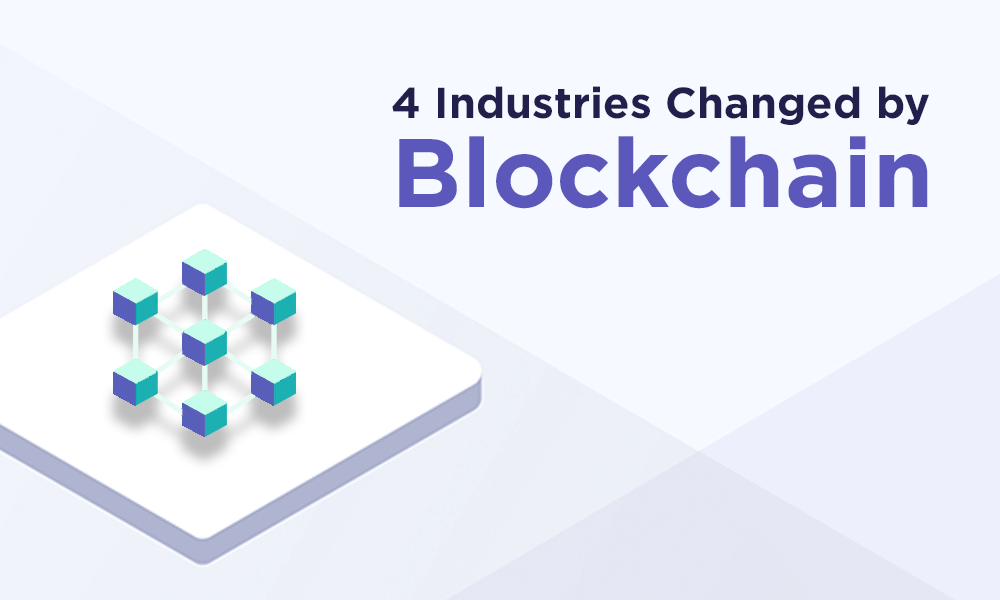 Blockchain is mostly known in connection with the cryptocurrency Bitcoin, which had been introduced in 2008. But that is not where the usefulness stops. However, blockchain can benefit almost every industry out there. Whether in finance, healthcare, or the government, many sectors are looking to integrate this unique database form into their business.

Many well-known and globally operating companies have already adopted blockchain technology. And they have good reason to do so. Blockchain has a variety of benefits that can help businesses improve efficiency, reduce costs, and increase security. Blockchain is so efficient that it might even be able to help failing economies. To understand the advantages in more detail four of the most important ones are listed below.

Transparency is a big concern for businesses and customers alike. Blockchain helps to improve the transparency of any industry by allowing companies to create a decentralized network, thus a centralized authority is no longer necessary. Additionally, the transaction ledger of a blockchain database is available for viewing, adding another layer of transparency.

The decentralized structure of blockchain makes a middleman for payments and other transactions superfluous, which leads to more speed and increased efficiency.

Security is always a very important aspect for companies to consider, and blockchain provides one of the most secure ways of record-keeping since every new transaction is encrypted and then chained to the previous transaction. Blockchain networks are immutable, meaning they cannot be altered once formed; thus, they are protected from hacking attacks and falsified data entries. Through decentralization, it also becomes trustless, which makes safe transactions easier.

Blockchain is optimal to track and trace goods within the supply chain simply and effectively. Every party is able to trace the goods in order to ensure that nothing is replaced or misused. That way, the supply chain becomes much more transparent, and complications like theft, loss, or counterfeit can be prevented. Another advantage is that through this, the authenticity of merchandise can be proven.

Since blockchain operates without a 3rd party due to the decentralized nature, costs for vendors can be drastically cut. Validating transactions also becomes much easier and faster, thus the work process is much more efficient, which eventually saves money as well.

How can those benefits change the way a business or even a whole industry operates? To get a better understanding of how certain sectors are using blockchain to their advantage, we have compiled a list of 5 industries that are actively being changed by blockchain. However, it should be noted that almost every sector has the potential to utilize blockchain in order to improve its business operations.

One of the industries benefiting from blockchain is the energy sector. Energy production, as well as distribution, has long been a crucial topic for every government, and its importance will continue to grow as the demand for energy and especially new and green energy increases. Blockchain has certain benefits which can help to transform this industry, make it more efficient and even more sustainable.

Environmental sustainability has been an important topic in the past years. Renewable energy consumption has grown at an average annual rate of 13.7% over the past decade, according to Forbes magazine. Thus, making the energy sector more environmentally sustainable has been a priority for many energy companies in recent times. By providing a network that makes the production, storage, and distribution of energy more efficient, blockchain has proven its ability to make a lasting change in the industry.

Blockchain makes a peer-to-peer energy trading model possible. This means that energy consumers can turn into energy producers, which are then able to sell any excess power back into the grid. There have already been trials with this sort of peer-to-peer trading, for instance in 2016 in New York and Perth, Australia.

Another benefit of blockchain usage is the reduction of costs for infrastructure and other operational aspects. Better transparency through the use of distributed ledgers is also an advantage.

Blockchain brings a breath of fresh air to the real estate industry in many different areas.

Face-to-face real estate transactions could become a thing of the past, allowing sellers and buyers to connect in a totally new way, cutting out any intermediaries. Smart contracts, tokenized real estate, and digital identities revolutionize the real estate market. As a matter of fact, there are already property companies out there utilizing blockchain.

Taking real estate trading online would change the way houses and flats are being sold or let. Blockchain can tokenize real property, which then can be traded like stocks. As tokens, real estate would become a liquid asset since they can be theoretically easily traded for fiat currencies. Additionally, this practice would also cut out the middleman. New platforms could replace brokers, lawyers, and banks by including functions like payments and legal documentation. Lower costs and a speedier process are the result.

Decentralization is another aspect that makes blockchain favorable. Data is accessible to all peers, transparent, and immutable. This leads to increased security, as fraud could be easily detected, and information is verifiable, thus buyers and sellers do not need to fear any transactions. Even the sale of property could be automated via smart contracts. Furthermore, digital identities would simplify the verification process of both tenant and investor. The documentation would also be easier. Another feature that streamlines the whole process is real-time accounting, which is also enabled through blockchain.

In the years to come, blockchain technology could make the real estate market more accessible for more people by making transactions more transparent, safer, and simpler.

Eventually, real estate could become a true peer-to-peer network all through blockchain-powered applications.

Even governments have caught on to the importance and usefulness of blockchain. Due to benefits like increased transparency, blockchain can be utilized in government processes and even for elections. Blockchain might even be able to help tackle corruption within a government.

Through decentralization, blockchain becomes very transparent, and peers are able to view and verify information. If citizens and governments share access to certain data, it is easier for independent people to confirm governmental claims, thus potential mistrust is minimized. The same principle can also be applied to ensure transparent and fair elections where fraud has no chance.

Another governmental area that could benefit from blockchain is cybersecurity. Certain government agencies keep records of names, Social Security numbers, birthdates, addresses, and other highly sensitive personal information, which makes them ideal targets for hackers. Blockchain can provide further security against fraud and hacking attacks. The same application would also allow the government to use efficient identity management for their citizens.

By increasing security, streamlining processes, and decreasing audit burden, blockchain could help reduce costs and enable an improved way to do finance management by increasing its efficiency as well as transparency.

Especially during the COVID-19 pandemic, healthcare has become an even more critical topic. Doubtlessly the healthcare sector has to become more effective in order to provide the best care to patients, not just during a pandemic. While this is a laborious undertaking that requires a multitude of reforms, blockchain might be able to help change healthcare services.

With blockchain, electronic health records can easily be managed. As patient data is often scattered across multiple facilities, it is difficult to access vital information at all times. Using a decentralized ledge is not only more secure and protects the patients' privacy, but it also ensures that the patient profile is accessible everywhere and can easily be shared. Through blockchain, medical records would be stored safely and could be updated across multiple facilities in real-time, freeing up resources and simplifying the work process for medical personnel.

Research is one incredibly vital branch of medical healthcare. The development of drugs for many diseases could be improved had the researchers access to public health data through a secure, decentralized network. The same network also allows for improved drug traceability. Since data is tracked in a decentralized network, the possibility of a fault is almost nonexistent. The through blockchain, improved traceability also enables medical facilities to track the supply chain from manufacturer to distributer.

The Future of Blockchain

In the coming decades blockchain will certainly gain popularity and will be used in a wide variety of industries and in many different forms. The benefits this technology brings to every individual sector help in big and small ways to revolutionize the world as we know it.